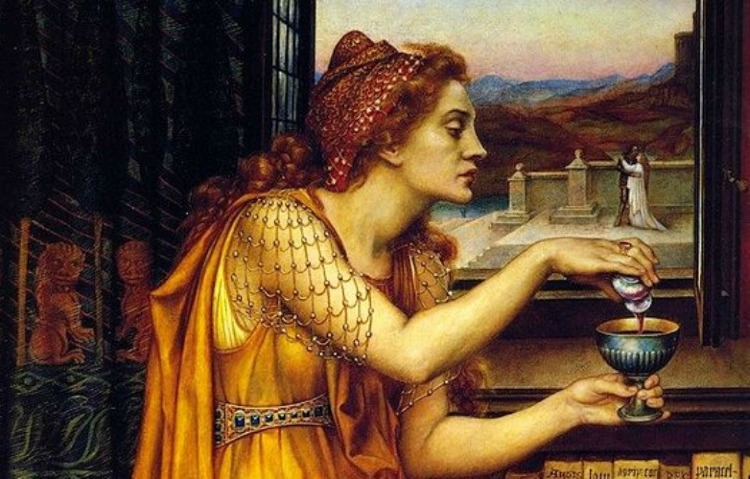 There have been murderers since the dawn of man, and surely there have been those who made a sport of killing their fellow human beings, but the first person we can definitively call a serial killer was Locusta of Rome. This woman toppled an emperor and founded a tradition of murder.

Born in what is today France in the first century of the Common Era, Locusta was an avid student of herbs and medicines. However, her particular interest fell upon the poisonous side of the plants she collected. She learned to create toxins that could cripple or kill, and eventually she moved from Gaul to Rome, where she plied her trade. She wasn’t alone; while being a poisoner was not precisely legal, it was well known that the elite of Rome procured and used poison to get rid of their adversaries. Dueling and other forms of violent murder were considered uncivilized, so poison was the go-to tool for the social climber in Rome around CE 54, and Locusta very quickly became a well known venom mixer.

When Agrippina the Younger, wife of Emperor Claudius, wanted to kill her husband so that her son, Nero, could ascend to the throne, she contacted Locusta for assistance. The poisoner was all too happy to help. Locusta provided two poisons – the first was added to a plate of mushrooms that Claudius, a fan of the fungus, wolfed down before the toxin took effect. When it did, the emperor doubled over in terrible pain, but the poison was not meant to kill him. Instead, Agrippina rushed to her husband’s side and, using a feather that Locusta had coated with the second poison, appeared to attempt to cause her husband to vomit up the mushrooms by sticking the feather down his throat. Instead, of course, she delivered the lethal dose that killed the emperor all while appearing to be helping.

Life should have been good for Locusta after this; she had the gratitude of the de facto Empress of Rome, and her legend as a master of poisons was at its peak. However, as mentioned, Locusta wasn’t just a business woman who was providing for her clients’ needs. She enjoyed the killing, and her lust for death got the better of her. She was convicted in CE 55 of murdering a man. She would have been put to death, but young Emperor Nero, aware of her assistance of his mother, spared her.

Nero, like his mother, was a conniving soul. His half-brother, Britannicus, was technically still eligible to be emperor. He couldn’t have that, so he saved Locusta from prison and had her make a poison to kill Britannicus.  Unfortunately for the poisoner, the first attempt failed, and Nero personally beat Locusta for her inadequate skills. Britannicus was only made ill, and quickly recovered. Locusta promised Nero the second attempt would work.

Getting the poison into Britannicus was the difficult part. Though young, he knew better than to trust anything he ate or drank, and always had a taster check the food and drink first. Nero knew this, and one evening at a large dinner party he had Britannicus’ wine diluted with too hot water. It was fairly common in Rome at the time to add hot water to wine to warm it, and Britannicus’ food taster had, in fact, checked the hot wine before giving it to the young man. Not thinking, Britannicus had cold water added to the wine to cool it down but did not have the taster check the wine again. Locusta’s poison was in the cold water, and just as Nero planned, his brother drank down the toxin.

Britannicus fell to the floor writhing in pain, but he was also known to suffer from epilepsy, a somewhat common ailment in the inbred imperial family, and so Nero forbade anyone from helping him. The seizure would, after all, pass in time and trying to stop it would be fruitless. Nero had Britannicus’ guards take the young man to his personal quarters, where he died a few hours later. Nero was quite pleased, but his mother, Agrippina, who had not been in on the plot, was shocked. She knew right away what her son had done and who had helped him.

Locusta, on the other hand, was now the favored servant of a quite happy emperor. Nero repaid her venomous skills with a large estate, great wealth, and even allowed her to open a school to teach others her talents with poison. For a short time, Locusta was essentially given free reign to murder anyone she chose, all while protected by a blanket pardon from the emperor.

Unfortunately for Locusta, Nero’s reign was not to be a long one. When the disgraced emperor fled Rome, he stopped at Locusta’s estate and had her brew him a poison that would let him commit suicide painlessly. He didn’t use it, however, instead choosing his own dagger as his means of execution. Locusta was arrested by the new emperor, Galba, who also rounded up Nero’s other favorites and marched them naked and in chains through the streets of Rome. According to legend, Locusta was put to death by an animal, possibly a giraffe, raping her to death. This is highly improbably, and it’s more likely that she was either beheaded or drawn and quartered.

Her students, however, went their separate ways, taking with them the lessons of the first lady of murder.

One thought on “Locusta of Rome – History’s first serial killer”