Today we discuss a type of ghostly spirit that originated in the good old USA: ectoplasmic entities. 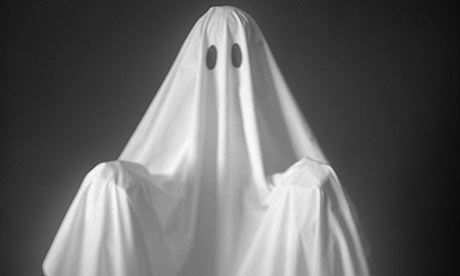 The term “ectoplasm” as it relates to spirits was coined by French Nobel Prize-winner and Professor of Physiology, Charles Richet.  However, the concept of ectoplasmic entities was truly explored by the American Spiritualist movement of the mid-19th century to the early 20th century.  In the simplest sense, an ectoplasmic entity is a spirit from beyond the grave manifesting in the physical world.

Initially, the Mediums of the Spiritualist Movement claimed that spirits spoke through them.  This was usually achieved while the Medium was in a trance-like state.  Traditionally, this occurred during a seance, with the Medium answering questions posed by the others in attendance.  The modern concept of the seance came from these early, rudimentary circles of questioners.

Eventually, however, Mediums claimed that spirits could do more than simply inhabit their bodies.  The spirits could, in fact, cause physical manifestations.  This was usually tapping or other sounds during a seance.  Because of the popularity of Spiritualism and the natural greed of human beings, there were a number of charlatans who gave the movement a bad name when they were exposed as frauds.  However, these con artists came up with many ingenious means of creating sounds and other small effects attributed to ghosts, leading the true Mediums to turn to more drastic measures to prove their connection to the beyond.

Thus began the age of ectoplasm.  Sir Arthur Conan Doyle described ectoplasm as, “a viscous, gelatinous substance which appeared to differ from every known form of matter in that it could solidify and be used for material purposes.”  Initially, ectoplasm came from the Medium themselves, usually pouring from the mouth, nose, or ears. 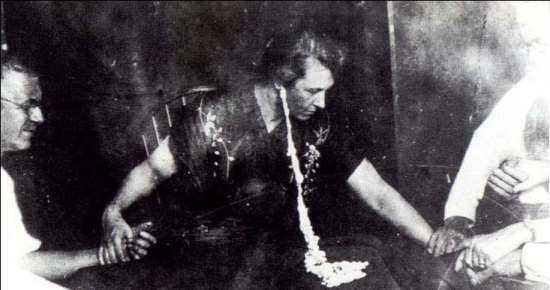 Soon, however, the ectoplasm stopped being simply a product of the Medium and became host to the spirits themselves.

You’ve probably seen photos of “ghosts” that are floating white mists – this is the modern view of ectoplasm.  No longer is there a source required for its manifestation.

The idea that ectoplasm could form a “body” for a ghost began to become more and more prevalent in the early 1900s.  Ghost photography became more popular than sitting in a seance listening to a Medium speak in a gravely voice.  Even the description of ghosts started to change.  The “white sheet” ghost came about as a way to show ectoplasmic manifestations.  Before the advent of this strange material, ghosts usually looked very much as the person did in life, though they might disappear suddenly, or walk through walls and other objects, but generally they weren’t described as glowing or in any way particularly different from seeing a normal person (in Western culture, that is – the Eastern world had many other ideas as to what ghosts looked like).

Of course, it’s really not possible to discuss ectoplasmic entities without talking about the movie that brought the word back into the common lexicon in the 1980s.  Ghostbusters was, of course, the renaissance of ghost lore, and brought ectoplasm to a new generation.  Oddly enough, the appearance of ectoplasm, or “slime” in the first movie is spot on.  It looks like viscous, runny snot.  The only thing the movie could have done better was to have the ectoplasm remain when the ghost is trapped, to essentially have a rain of slime when a ghost is pulled in, as the ectoplasm is left behind.